This research adds to the evidence that a Whale Protection Zone is needed. 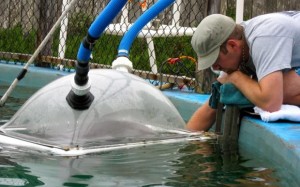 Picture yourself at a noisy bar. You realize that you have been shouting at your date all night in order to be heard. Well, orcas in Puget Sound are in kind of the same situation. Marla Holt, a research biologist with NOAA’s Northwest Fisheries Science Center, has found that loud boat noise forces endangered orcas to raise the volume of their calls….Holt and Noren found that when the dolphin was whistling harder and louder its metabolic rate rose by up to 80 percent above normal resting levels. Just like with humans, when marine mammals’ metabolism goes up, they burn more calories.