Why Is It Needed?

Orca Relief Citizens’ Alliance, Center for Biological Diversity, and Project Seawolf have submitted a formal regulatory petition to the National Marine Fisheries Service (NMFS), requesting that the agency use its authority to establish a whale protection zone (WPZ) to expedite recovery of the endangered Southern Resident Killer Whales (SRKW). 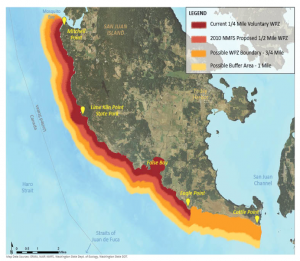 Orce Relief, our partners, and many who live throughout the region, particularly in San Juan County, are deeply concerned about the Southern Resident’s declining status, risk of extinction, and the clear need to strengthen recovery efforts. The SRKW population is low and declining, with a distorted age-sex composition; their habitat is degraded due to harmful and increasing human activities. This population has virtually no tolerance for further decline. A highly precautionary management approach is essential to lower the SRKW’s risk of extinction and the costs of it’s long-term conservation.

Why Are We Submitting a Federal Petition?

The National Marine Fisheries Service (part of the U.S Department of Commerce) is responsible for recovering and conserving the SRKWs, but the agency’s existing regulations have not achieved for their intended purposes. The SRKWs are now at risk of extinction because of habitat degradation and insufficient protection of the SRKWs from harmful human activities.

Currently, vessels are required to stay at least 200 yards away from the whales; also, boats are not allowed to “park in the path” of orcas within 400 yards ahead of the whales’ line of travel. However, these approach limits do not, by themselves, provide sufficient protection. Scientists estimate that at 200 yards, boat noise still “masks” 75% to 90% of the natural sounds important to SRKWs.i These whales depend on natural sounds for foraging, communicating, and navigating; their ability to hear their world is vital, given the limits of light transmission and vision in the marine environment. A WPZ could reduce masking substantially.

Our petition will request that NMFS take additional regulatory steps to address the noise and disturbance from small motorized vessels experiences by the SRKWs almost constantly from April through October. NMFS has summarized the effects of noise and disturbance this way: “Disturbance from vessels and sound can… [negatively] impact the behavior and feeding of the whales, increasing their energy expenditure, possibly reducing the effectiveness of their hunting techniques, and reducing the time they spend foraging.”ii

We propose a protected area in Haro Strait, Salish Sea, an area critical for essential orca behaviors including foraging and feeding, socializing (which may include reproductive activities), resting, and transiting. The WPZ is a conservation and recovery action that NMFS can implement relatively quickly and inexpensively. It will be especially effective when combined with speed limits and a permit system for motorized whale watching.

Why Do the SRKWs Need a Whale Protection Zone Now?

The best available scientific information clearly documents the need to reduce these whales’ exposure to noise and disturbance, which have undoubtedly increased in the Salish Sea over the past decade. More and more people inhabiting the region means more commercial and private vessels on the water – many of them in search of whales.

In its 2014 review of 10 years of research and conservation on SRKWs, NMFS expressed concern about the failure of the SRKWs to recover and declared that the agency expected to “explore additional management actions outlined in the recovery plan.”iii Furthermore, NMFS said “seasonal health assessments, habitat use, and potential times and places with prey limitations or vessel impacts that affect health or feeding will be taken into consideration when determining the need for additional conservation actions, such as a protected area.”iV The agency has been studying and considering a protected area for the southern residents since at least 2005. During this period, the SRKW population has declined by 8%.

NMFS regards prey availability, vessel effects (especially noise and disturbance), and contaminants as the three most severe causes of the SRKW decline and failure to recover. In Puget Sound and the Salish Sea, killer whales must have greater access to salmon and reduced exposure to contaminants, but bringing about these habitat improvements will likely take decades and large expenditures of scare public resources. In contrast, reducing noise and disturbance by establishing a Whale Protection Zone can be achieved relatively quickly and inexpensively.

What Are The Needed Elements of a Whale Protection Zone?

The purpose of the WPZ is to reduce SRKW exposure to human-caused noise and disturbance and to ensure that SRKWs have unimpeded access to their primary foraging and resting habitat during spring, summer, and autumn months. NMFS has acknowledged that protecting “portions of the whales” habitat along the west side of San Juan Island would protect the whales 1) from multiple threats; 2) in an area the local [human] community already recognizes; and 3) [by providing] opportunities to evaluate the effectiveness of the ares.”v

A Small, But Essential Protected Area. NMFS should establish a contiguous WPZ along the western and southern coasts of San Juan Island, 3/4 of a mile from the shore (with an additional 1/4 mile wide buffer area), from Mitchell point in the north, to Cattle Point in the south about 10-12 square miles, 0.5% of the currently designated critical habitat) in the center of the SRKW’s critical habitat core area, which is especially important to their recovery.

No-Wake Speed Limit. Vessels using the zone for the other purposes (i.e those vessels that are not following whales or intentionally approaching them) be required to adhere to a “no-wake” speed limit. NMFS should include a “no wake” speed restriction when boats are closer than 400 yards to whales throughout the critical habitat.

Permit Systems (Licenses), Especially in the Core Critical Habitat. A system of permits or licenses for motorized commercial (and possibly private) whale watching combined with education programs would go a long way toward ensuring that the whale watching fleet (and the private whale watchers the fleet attracts and for which the fleet sets the example) comply.