The Center for Whale Research announced on December 31st that the world’s oldest known Orca J2, compassionately named Granny, has not been seen since October and is most likely deceased.

J2 recently acted as the matriarch of the J-pod, and it is believed she was anywhere from 75 to 105-years-old. The Southern Resident Killer Whales are classified as endangered and the death of J2 brings the population down to an alarming 78 individuals.

For an estimated 100 years, J2 made the Salish Sea her home. During that time she witnessed human population growth, the pollution of our waters, diminishment of the Chinook salmon, increases in shipping and other motorized water traffic, and the start of the captive whale industry (which many of her pod members fell victim).

In 1965, the compulsion to capture wild orcas began to emerge. The famous SeaWorld orca “Shamu” was sold having been orphaned by whale hunters for the Seattle Public Aquarium. Shamu was a member of J2’s pod.

Members of the J-Pod, K-Pod, and L-Pod have all suffered loses in the form of kidnapping, accidental killing, and orphaning due to the booming entertainment industry and capture process. Many believe that when the infamous event at Penn Cove occurred, where 80-90 orcas were trapped and evaluated for captivity sales, that J2 (Granny) was most likely among them. To read more about the Pacific Northwest’s history of orca captivity, click here. 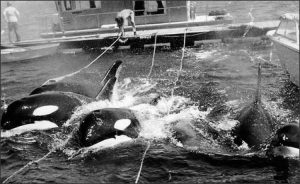 J2 also suffered food shortages due to human interference. In January, of 2016, it was found that Chinook salmon makes up 98% of the SRKW’s diet. However, many of the dams that were erected in the Klamath River, during J2’s lifetime, have reduced the food supply for the SRKW populations. Many conservation groups are calling for the removal of all four Klamath River dams, which would be one of the largest restoration projects in the United States. Read more here. 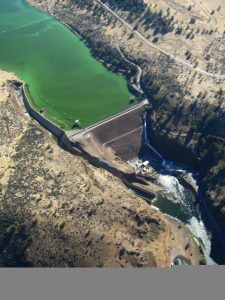 In addition, J2 managed to survive an increase in shipping and motorized water vehicle traffic. Orca Relief has long maintained that the noise pollution from motorized boat traffic and whale watching is a contributing factor to the rapid population decline. In recent years, that boat traffic has increased significantly, and we fear more disrupting traffic is on the horizon.

It is expected that 34 tanker vessels will be traveling through the Juan De Fuca Strait each month. Canadian Fisheries Minister Dominic LeBlanc admitted the Trudeau decision has complicated the future of the SRKWs.

For decades J2 and the Southern Resident Killer Whales have managed to survive human disruption and greed. It is time to create a Whale Protection Zone off the shores of San Juan Island. The SRKW’s are rapidly diminishing and we must do everything possible to safeguard their future.

On November 4th, 2016, Orca Relief, along with Center for Biological Diversity and Project SeaWolf, filed a petition with the National Marine Fisheries Service to enact a Whale Protection Zone in the Salish Sea’s Haro Strait. Sign our People’s Petition (Here) and support Orca Relief’s efforts. The very existence of the SRKW population relies on our ability to change our behavior, preserve the species, and protect their habitat.