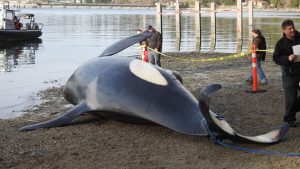 News broke Wednesday that Southern Resident J-34, a male born in 1998 and compassionately named Double Stuf, was found dead floating off shore in Sechelt British Columbia. The whale was brought in and The Vancouver Aquarium will be performing a necropsy to identify potential cause of death. In 2003, Canada listed the Southern Resident Killer Whales (SRKW) as endangered. The Southern Residents are also categorized as endangered under the United States Endangered Species Act and are seen as a Species in the Spotlight by the U.S National Marine Fisheries Service.

The news of J-34’s death is distressing considering the Southern Residents’ already fragile population. This is not the first J Pod death reported this year. In October J-28 (female, 23) was confirmed dead, and her calf has since been missing.

The Department of Fisheries and Oceans, Canada, stated that no cause of death has been determined (although one press report indicated that DFO is concerned J-34 may have been hit by a vessel). The Sechelt First Nation will take possession of J-34’s skeleton for ceremonial purposes.

The death of J-34 comes after the recent controversy surrounding Prime Minister Trudeau’s decision to approve the Kinder Morgan Trans Mountain pipeline expansion. Approximately 79 whales still occupy the Salish Sea for half of their lifetime. The pipeline expansion will increase shipping traffic and noise pollution which is potentially fatal news for the SRKW’s who are greatly impacted by decreasing food supply and already existing motorized vessel noise, especially from commercial and private whale watching. It is expected that 34 tanker vessels will be traveling through the Juan De Fuca Strait each month. Canadian Fisheries Minister Dominic LeBlanc admitted the Trudeau decision has complicated the future of the SRKWs.

Orca Relief has recently called on the National Marine Fisheries’ Service (NMFS), in the form of a regulatory petition, to take the steps needed to protect the SRKWs by creating a Whale Protection Zone in Haro Strait off San Juan Island.

To show your support for the protection of the Southern Resident Killer Whales, please sign the public People Petition generated by Orca Relief. Click here. It is imperative we safeguard these remarkable creatures and give them the space and quiet time they need to thrive again.