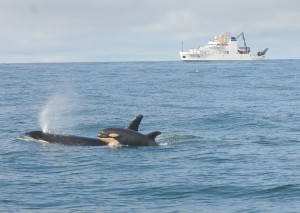 The winter survey addressed a high research priority to fill a major gap in our understanding of SRKWs life history – where these whales go during the winter, what they do, and what they eat.

Join us for this special presentation by Dr. Brad Hanson, NWFSC lead killer whale researcher. Be the first to hear what researchers observed, and how data collected on this cruise will help recover J, K and L pods.

This is the first in the 2015 series Orca Talks hosted by The Whale Trail in West Seattle. The event also features updates from Seal Sitters and Diver Laura James (tox-ick.org).

Buy tickets early to reserve your seat. And hurry! This will likely sell out.

About The Whale Trail

The Whale Trail (www.thewhaletrail.org) is a series of sites around the region where the public may view orcas and other marine mammals from shore. Our mission is to inspire appreciation and stewardship of whales and our marine environment. Our overarching goal is to ensure the southern resident orcas don’t go extinct.

Through our current sites and signs, including two on every Washington State ferry, we reach more than 30 million people each year. The Whale Trail is currently adding new sites along the west coast, from BC to California, throughout the southern resident orcas’ range.

The Whale Trail is led by a core team of partners including NOAA Fisheries, Washington Department of Fish and Wildlife, the Seattle Aquarium, Olympic Coast National Marine Sanctuary, and the Whale Museum. Donna Sandstrom is the Founder and Executive Director. The Whale Trail is a 501(c)3 nonprofit organization, registered in Washington State. Join us!