Protected zone for orcas? Find out about it at The Whale Trail’s upcoming Orca Talk

Protected zone for orcas? Find out about it at The Whale Trail’s upcoming Orca Talk 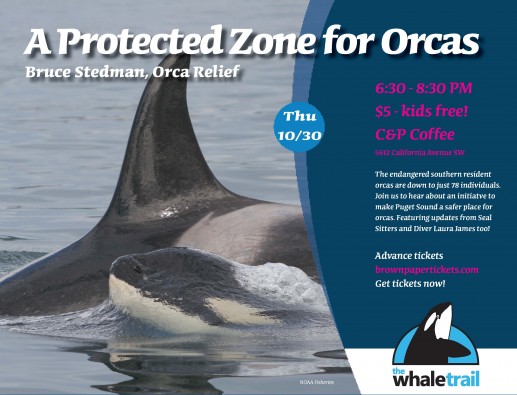 The Southern Resident Killer Whales are endangered and seriously declining; their 2014 population of 79 is the lowest since 1985. To aid their recovery, Orca Relief is urging NOAA Fisheries to conduct a public process that will result in a Whale Protection Zone for the SRKWs.

A well designed and enforced WPZ would provide the Southern Resident Orca a safe-haven in the very core of their critical habitat, and a relief from vessel impacts including noise, disturbance and air pollution. Bruce Stedman, Executive Director of Orca Relief, will describe the key aspects of how a protected area for the Orca should be developed and how it could help the SRKWs begin to recover.

Join us to hear the latest about the orcas, and updates from Robin Lindsay (Seal Sitters), and “Diver Laura” James (tox-ick.org).