The National Marine Fisheries Service (NMFS) announced today that it will consider a whale protection zone that will reduce noise and vessel disturbance of endangered southern resident killer whales. This population of killer whales has declined severely with only 78 whales remaining. The scientific petition seeks to protect core foraging habitat for the killer whales by reducing vessel disturbance. The key threats to killer whales include prey limitation, noise and pollution. The Proposed Rule will be published in the Federal Register on Friday, January 13th, 2017, and open for public comment during a 90-day period through the Administrative Procedure Act process. 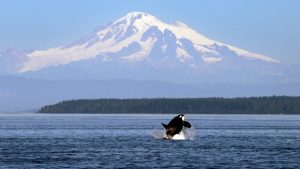 NOAA Fisheries is seeking public comments on a petition calling for a whale protection zone for highly endangered Southern Resident killer whales on the west side of Washington’s San Juan Island.

In 2009 NOAA Fisheries considered a similar protection zone as part of a package of vessel regulations to protect these whales. The agency adopted vessel traffic regulations in 2011 requiring that boats stay 200 yards from the whales and out of their path, but it did not finalize a protected zone in light of strong opposition at the time.

“To be effective, regulations require a degree of public acceptance, and we did not see sufficient support for a protected area in 2011,” said Lynne Barre, NOAA Fisheries recovery coordinator for the Southern Resident killer whales. “The petition presents an opportunity to revisit that idea and get input from the public on this type of protection for the whales.”

Studies indicate that the whales forage less in the presence of boat traffic, and boat noise may disrupt the echolocation clicks the whales use to find food.

NOAA Fisheries filed its request for public comments in the Federal Register today, with a comment period of 90 days. The comments will help NOAA Fisheries decide whether to take further action on the petition.

The action follows a difficult year for the Southern Residents, with the loss of seven whales in 2016. NOAA Fisheries designated the whale population as one of eight national “Species in the Spotlight” at high risk of extinction and has an action plan to advance the whales’ recovery.

“We’re looking at every option and every opportunity to address the threats to these whales,” said Barry Thom, Administrator of NOAA Fisheries West Coast Region. “We’re all very concerned about the losses of the last year and we’re determined to work with our partners to pursue the action plan and turn that around.”

NOAA Fisheries recently completed a status review for Southern Residents under the Endangered Species Act. Although the review documented progress in understanding and addressing threats to the whales, it concluded that the Southern Resident population remains at high risk of extinction and should remain listed as endangered. Population modeling by NOAA Fisheries’ Northwest Fisheries Science Center suggests the possibility of further declines in Southern Resident numbers, with recovery actions needed to reverse the trend.

Research has identified three primary threats to the Southern Residents: limited availability of their favored prey, Chinook salmon; accumulation of toxic pollutants in their bodies; and the impacts of vessel traffic and noise. The action plan includes science-based steps to address each of the threats, from individual health profiles of the whales to better understand their physical condition to targeted salmon restoration to rebuild the whales’ key food sources.

To implement one of the actions, NOAA Fisheries’ partner the SeaDoc Society plans to convene a panel of experts in early March to examine the latest science on the availability of the whales’ prey and its relationship to their body condition. The SeaDoc Society is a program of the UC Davis School of Veterinary Medicine.

“We recognize that time is of the essence to pull data and experts together regarding the health of the whales and, as scientists, we’re trying to work together, move forward, and inform recovery,” said Joe Gaydos, wildlife veterinarian and chief scientist of the SeaDoc Society.

Click here for more details and instructions for submitting comments. 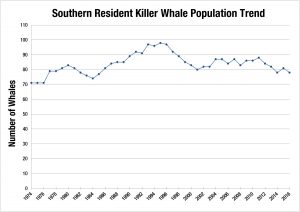