Born under a bad sign? Newborn joins population in throes of 30-year low

Born under a bad sign? Newborn joins population in throes of 30-year low 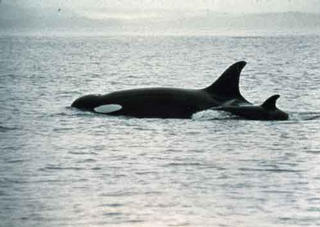 From the The Journal of the San Juan Islands:

A two-year drought came to a welcomed end Saturday, Sept. 6, as researchers with the Center for Whale Research spotted a killer whale calf off the west side of San Juan Island.

Designated L-120 by the Center, keeper of the official yearly census of the Southern resident orcas, the calf is the first newborn to join the endangered population of killer whales since 2012.

While its appearance offers some relief from a prolonged, unusual absence of newborns, it comes at a time when the population, 79 orcas in all, has tumbled to its lowest mark in 30 years.

The plight of the population and its reproductive challenges (females of breeding age have fallen 20 percent and juvenile females by 21 percent since 2005), prompted renewed calls for greater protection from vessel traffic by Orca Relief.

The San Juan Island-based orca advocacy group has long-held that constant pressure from vessel traffic and whale-watch boats, in the summer months off the west side of San Juan Island in particular, causes greater stress on an already struggling population and interferes with the killer whales ability to find prey.

“Everyone concerned about these whale agree there should be more salmon for them to eat, but this could take 30 to 60 years–if ever–to achieve,” Orca Relief Executive Director Bruce Stedman said in a press release. “Only reducing the noise and disturbance from motorized boats can be achieved relatively easily, quickly, and inexpensively.”