SEATTLE, WA–(Marketwired – January 30, 2017) – Orca Relief Citizens Alliance is honored to have Dr. Christopher Clark, Imogene Johnson Senior Scientist, Cornell University; and Senior Advisor, Planet OS, join its advisory board. Dr. Clark’s expertise in animal acoustic communication, with an interest in the application of advanced acoustic technologies for scientific conservation of endangered species, will be an asset to the board as Orca Relief continues to seek support of its petition to establish a Whale Protection Zone on the west side of San Juan Island, Washington state. 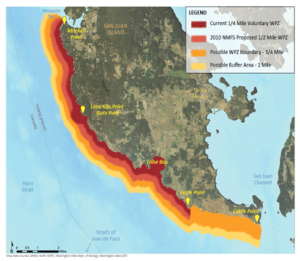 Orca Relief is a co-sponsor of the Whale Protection Zone Proposition, which was recently added to the Federal Register and is now open for public comment during a 90-day period ending April 13, 2017, through the Administrative Procedure Act process.

“The very survival of Southern Resident Killer Whales is at stake. Joining this effort is more than just adding my marine mammal scientist name to a list: it is a full-on commitment to action for these magnificent animals,” said Dr. Christopher Clark.

“We are delighted that Chris Clark, perhaps the most well-respected marine mammal acoustics scientist in the world, is joining the Orca Relief advisory board. Today, the endangered Southern Resident Killer Whales are dying of starvation, caused by the presence of motorized boats during years of low Chinook salmon count. This is a sonar interference problem, and Chris can help all of us better understand the problem and its solutions. This is particularly timely as we move forward in creating a Whale Protection Zone,” said Mark Anderson, Founder of Orca Relief Citizens Alliance, CEO and Chairman of Strategic News Service (SNS), and Founder and Chairman of the annual Future in Review (FiRe) conference.

Orca Relief Citizens Alliance is a volunteer-driven 501(c)(3) nonprofit organization focused on recovering the population health of the endangered Southern Resident Killer Whales (SRKWs) of Puget Sound and the Salish Sea. Orca Relief relies on the best available science to demonstrate what must be done to protect and recover J, K, and L pods, particularly from the noise and stress they experience from commercial motorized whale-watch boats and the many private boats they attract. Orca Relief is dedicated to creating a Whale Protection Zone on the west side of San Juan Island, Washington state, to provide a safe haven that will assist the Puget Sound’s endangered Orca in their recovery.